Camera traps are amazing. They give rangers eyes throughout the forest so they can spring into action if a gorilla needs them

Camera traps are amazing. Once in position in the forest, they will record an image every time something moves past them. 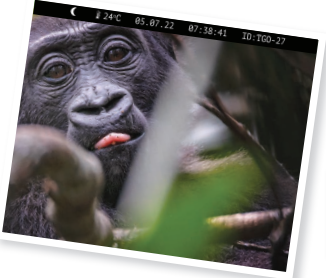 It’s called ‘smart monitoring’. And it means rangers know if a gorilla troop has moved through the area. They can see if any of the gorillas are injured and need immediate medical help. They can even spot if any new babies have been born. What used to take hours of specialist tracking skills can now be achieved in a matter of minutes.

And most importantly, rangers can also see where hunters have been active – and when. Then they can instantly call in more ranger patrols to come in and clean up any deadly traps. They can also make sure that hunters don’t get any nearer to gorillas.

Every single camera trap is like giving a ranger many more pairs of eyes. Eyes that never close. That stay where they’re needed day after day, night after long night. They can’t be tricked and never miss a single thing.

But they urgently need your help once more today. Will you make a donation, and help by:

Camera traps are much more than just extra pairs of eyes for rangers.

It’s almost as if they mean every ranger can be in two or three places at the same time. So they can rush into action where they’re most needed, rather than spending time patrolling other parts of the forest. 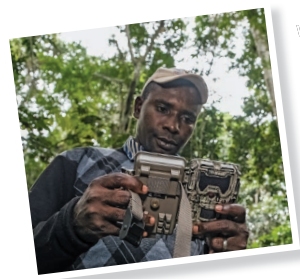 One ranger told us it used to take weeks of tracking to be sure you knew where gorillas were, but “now camera traps can tell us where the gorillas are and what they are doing.”

We’ve seen an incredible increase in hunting recently. In some areas rangers have reported that they’re finding and destroying 40 times more deadly traps and snares than they would normally expect.

There’s a simple reason for this. Food prices have rocketed recently in the Democratic Republic of the Congo, Uganda and Rwanda. Some basic foodstuffs are now 50% more expensive. That puts them completely out of reach for many local people. They’re being forced into the forest to hunt.

As a result, gorillas are really suffering. Even though the local hunters are not intending to kill them, baby gorillas are incredibly curious. They simply can’t resist investigating anything new they come across. Even if it could kill or maim them.

Without more protection, the gorillas stand no chance against all these extra deadly traps. As you know, we can’t afford to lose a single gorilla.

You can help give them a chance of survival by giving rangers the camera traps they need to help monitor the gorillas and ensure they are not subject to any potential threats.